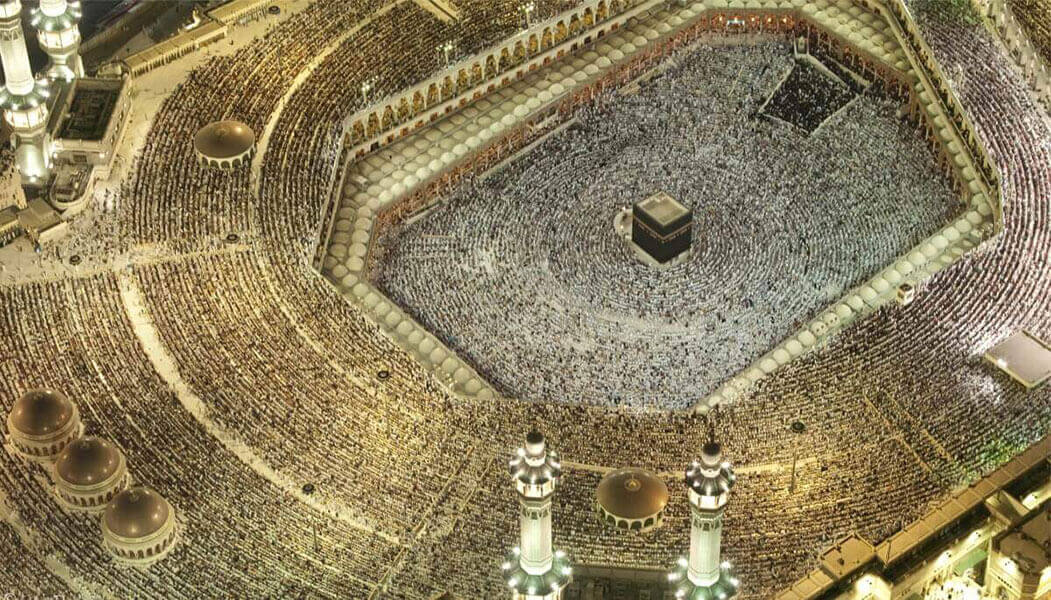 Significance of Umrah in Islam

In the early days of Islam, tensions were constantly on the rise in Makkah between the Muslims and the kuffar (pagans), who prevented the former from performing Hajj in the city. In 628 AD (6 Hijri), the Muslims travelled from Madinah to Makkah, after the Prophet (peace be upon him) had a vision of the Muslims performing the rituals of Umrah.

They were, however, refused entry by the Quraysh tribe, and the Prophet did not wish to enter the holy site by force out of respect for Ka’aba. Diplomatic negotiations occurred between the two parties, concluding with the Treaty of Hudaybiyyah that promised a period of 10 years free of hostilities, and access to the Ka’aba for three days annually.

In the subsequent Hijri year, the Prophet (peace be upon him) made his way to Makkah together with 2000 Muslims, men, women and children, where they performed the rituals of what would become the first Umrah in Islam.

Umrah is considered by many to be the “minor pilgrimage”, while Hajj is considered to be the “major pilgrimage”. It is a sunnah, not an obligatory act, and Muslims are advised to strive to perform it not once, but for as many times as they are able during their lifetime, as evidenced the hadith narrated by Abu Hurairah (may Allah be pleased with him), wherein the Prophet (peace and blessings be upon him) says: “The performance of `Umrah is expiation for the sins committed between it and the previous ones. And the reward for Hajj Mabrur (pilgrimage accepted by Allah) is nothing but Paradise.” (Al-Bukhari)

Performed with the truest of intentions, Umrah can be a way to purify the mind and soul tarnished by sin and blemished by negativity, for it has been reported that the Prophet (peace and blessings be upon him) said, “Alternate between Hajj and Umrah, because both rid one of poverty and sins just as the blacksmith’s bellows remove all impurities from metals like iron, gold and silver.” (At-Tirmidhi)

One should seek forgiveness from Allah Almighty at all times and places, but Umrah has tremendous rewards, as it requires the Muslim to leave their home and the comforts of life behind and devote their entire time to the worship of Allah. In Surat Al-Baqarah (2:186), the Almighty says, “And when My servants ask you, [O Muhammad], concerning Me - indeed I am near. I respond to the invocation of the supplicant when he calls upon Me. So let them respond to Me [by obedience] and believe in Me that they may be [rightly] guided.” And how greater are His blessings when seek Him and call upon Him in His Sacred House?

Furthermore, any Muslim who journeys for Umrah is considered a pilgrim until they return home. In a hadith narrated by Ibn Umar, the Prophet (peace be upon him) said, “The performers of Hajj and Umrah are deputations of Allah Almighty. If they call Him, He answers them and if they seek His forgiveness, He forgives them

Umrah is considered one of the best deeds one could perform to gain closeness to Allah Almighty, and it is extremely critical to learn of the great blessings one could gain by utilizing every single moment during their time near the Sacred House of Allah, and the massive impact it could have on their spiritual and mental state, not only at the time of performing this minor pilgrimage, but throughout the rest of their lives. It is not simply an act by which one can reset their slate and wipe it clean.

It is also considered a form of Jihad in this modern day and age, especially for the elderly, the weak, the women and children, who would not have been capable – during the time of the Prophet (peace be upon him) – of partaking in the Islamic conquests and traditional acts of Jihad.

While Umrah can be performed at any time during the year except during the days of Hajj, it is especially recommended that the Muslim performs it during the holy month of Ramadan. In an important hadith, Ibn Abbas reports that the Prophet (peace be upon him) said, “Umrah performed in the month of Ramadan will equal (in rewards) to that of Hajj or Hajj performed with me.” (Bukhari, Muslim)

In another hadith, Umm Maaqil (may Allah be pleased with her) narrated, “When the Messenger of Allah performed the Farewell Pilgrimage; and we had a camel; Abu Maaqil dedicated it to the cause of Allah. Then we suffered from a disease; and Abu Maaqil died. The Prophet went out for hajj. When he finished the Hajj; I came to him. He said to me: Umm Maaqil; what prevented you from coming out for Hajj along with us? She said: We resolved to do so; but Abu Maaqil died. We had a camel on which we could perform hajj; but Abu Maaqil had bequeathed it to the cause of Allah. He said: Why did you not go out for hajj upon it; for hajj is in the cause of Allah? If you have missed this Hajj along with us; perform Umrah during Ramadan; for it is like Hajj